In Lima,
a Home and Studio
That Remains a Work in
Progress


Amid the grayness of Peru’s capital, a multidisciplinary artist creates a place that illuminates both his practice and the city that informs it.


WHEN THE LIMA, Peru-based artist Miguel Andrade Valdez started sketching designs for a home and studio in the bohemian district of Barranco, his primary obsession was not the building’s form but how it might give shape to his native city’s stark, paralyzing light. Throughout its austral winter, banks of fog shroud the escarpment that separates the Peruvian capital from the Pacific, turning the sky into a blank, dimensionless field: “Six in the morning looks just like 6 in the evening — there’s nothing to mark the horizon,” says Andrade, 43. Herman Melville, who docked in the city as a 19th-century seaman, devotes a paragraph of “Moby-Dick” (1851) to Lima’s “white veil,” which, he writes, “spreads over her broken ramparts the rigid pallor of an apoplexy that fixes its own distortions.” Many of the city’s 10 million residents call it Lima la Gris — Lima the Gray — others, simply, La Horrible.

Andrade was similarly ambivalent about the city himself. As a child, he spent weekends with his father among the Baroque church towers and sagging wooden balconies of the historic center — at the time, he says, he saw old Lima as “a marvel, like a movie.” But it was a difficult place to grow up, plagued through the 1980s and early ’90s by retributive violence between the central government and the leftist guerrillas who called themselves the Shining Path. By 2005, when he graduated from Lima’s Pontifical Catholic University of Peru with a degree in fine arts, car bombs and political oppression had given way to economic boom times driven in part by rising prices for copper and gold, two of the country’s key commodities. Lima’s young artists spread out across a metropolis suddenly released from decades of fear in search of studio spaces: Many settled in Barranco, a coastal neighborhood founded in the 19th century as a wealthy resort town that, through the 1970s, became a hub for writers, painters, musicians and filmmakers. In 2008, Andrade bought a half-ruined adobe house on a 1,900-square-foot plot several blocks back from the genteel seaside mansions. Back then, though, the building was “unlivable, in really bad shape,” he says, and for years he left it untouched.

Lima, too, was becoming a burden. In 2010, after the city’s long winters became unbearable, Andrade moved to Mexico City, where he worked on and off for five years; soon after arriving, he visited Luis Barragán’s 1948 home and studio, which to him represented “a different sort of architecture: kind, unpretentious, filled with details that weren’t immediately evident.” He was especially drawn to the inward-facing rooms, the hidden gardens and the manipulation of shadow and light. “I thought those elements would work well in a city that’s gone through so much violence, so much aggression, so much ugliness,” he says.

Andrade scrapped his plans to preserve his original adobe structure and imagined, instead, a cuboid prism rising out of a street-side wall, its bank of windows jutting from its upper surface, like one of old Lima’s covered balconies transubstantiated into glass. Built from a limited palette of concrete, brick and terrazzo, the house has since become Andrade’s haven and laboratory, reflecting and shaping the work he makes within it while transforming his relationship to the strange, melancholy — and ultimately inspiring — city he again calls home.

TODAY, ANDRADE’S HOUSE, which he shares with his 28-year- old partner, Diana Ortega, an architect, and their 18-month-old son, remains a work in progress. A plywood door opens off the street into a narrow garden of philodendrons, ferns and bromeliads connected to the 920-square-foot studio through a pair of 16-foot- high windows, which pivot on iron mullions that divide them into four equal quadrants (a nod to Barragán and his collaborator the German-born artist Mathias Goeritz), dissolving the barrier between indoors and out. Upstairs, summer sun streams through the glassed-in balcony that bends around the corner of the 380- square-foot living-dining room, framing a panoramic view of low- slung rooftops, branching acacias and a pale sliver of the Pacific beyond. (On foggy days, blackout curtains hide the omnipresent gloom.) At the back of the house, in the 370-square-foot primary bedroom, a glass-sided cube rises out of the ceiling, a contemporary take on the three-dimensional skylights called teatinas that have been used to diffuse and filter Lima’s oppressive winter light since the 18th century.

When Andrade began casting the house’s first concrete columns and lintels in 2013, plywood formwork also began appearing in his artistic practice. In one piece from that period, “Construção/La Rabona,” he drew a sketch of a minor Lima monument, then commissioned three master builders to make plywood molds that would yield the desired shape. The objects, made from materials that sculptors and architects typically discard, “point to a volume that doesn’t exist, that will never exist,” Andrade says — in other words, to a surface containing a void, much like the home itself.

In the years since Andrade and Ortega met in 2018, the house has been transformed from a Brutalist mass into something more precise and humane. Together, they sheathed the structure’s second floor in pale pink washed terrazzo, dissolving the heavy box into a Cubist cloud. To keep from overstimulating himself, Andrade initially left most of the interiors blank, though they’re now filled with prototypes made by a design collective called Taller Tarapacá that he and Ortega founded in 2019 along with the 32-year-old industrial designer Paula Cermeño León (who helped Andrade turn his first sketches for the house into usable plans) and the 35- year-old textile designer Mozhdeh Matin. Behind Andrade’s rooftop office — a box of concrete and glass surrounded by potted sago palms and epidendrum orchids like tiny red and orange candles — an Enzo Mari-inspired cabinet holds a collection of ceramics designed by Cermeño in dusty shades of turquoise and ocher; in the living room, there are wool carpets made by the local weaver Inocencio Fernández, 53, their rough stripes of sienna and rust translated into textile patterns by Matin from Andrade’s oil paintings.

In his own work, Andrade has in recent years traded cement and paint for layers of old fliers that he peels off the city’s walls and assembles into sculptural slabs, the smallest roughly a foot across, the largest — called “Moby Dick” (2021) — a towering monolith nearly eight feet tall. Along with his 28-year-old assistant, Elvis Rosales Valencia, he whitewashes them and scrapes down the surfaces to reveal flecks of neon green ink or glimpses of trash, embedded like shards of pottery in an archaeological site. From a distance, they resemble the marble steles that ancient societies once used to record battles or royal lineages for posterity. But rather than proclaim sanctioned facts — the static material of official history — these objects, like the house, turn inward, concealing fragments of Lima’s collective memory beneath a pallor of white plaster. The pieces are elegiac, referencing the pollution that has choked Lima’s rivers and the pandemic-era loss of shared experiences, including the canceled concerts and movie screenings advertised on the posters. But they are also Andrade’s rapprochement with his city, its unflinching light given solid form, contained by a house that is always unfinished, always changing, yet filled with color and life. 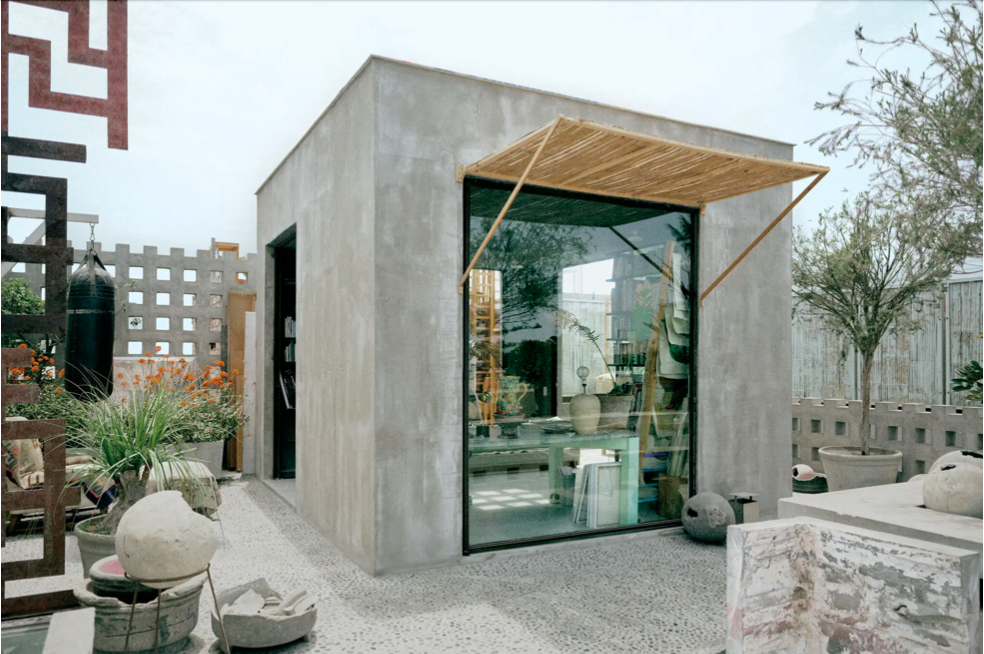